“Cuba would like all Canadians as well as travel agents and tour operators that the time you have been waiting for is here!” said Lessner Gomez, Director for the Cuba Tourist Board, “Cuba with all its natural charm, vibrant culture and kind people await you all with open arms. We are ready to welcome you back!”

Over the past few months, the Cuban government has focussed its efforts in on the battle against the pandemic. During this time, government officials took steps to improve all hotels and tourism infrastructure. Hygiene and sanitary protocols were put in place in order to ensure the safety of the Cuban people and its international visitors as tourism activities are reactivated.

Constant communication and coordination with all relevant stakeholders in the tourism industry has been a priority throughout the COVID-19 pandemic, in order to keep them informed on all updates and current activities. A new promotional campaign will also be launched across Cuba Tourism Board social media platforms to reactivate and invite tourism to Cuba. 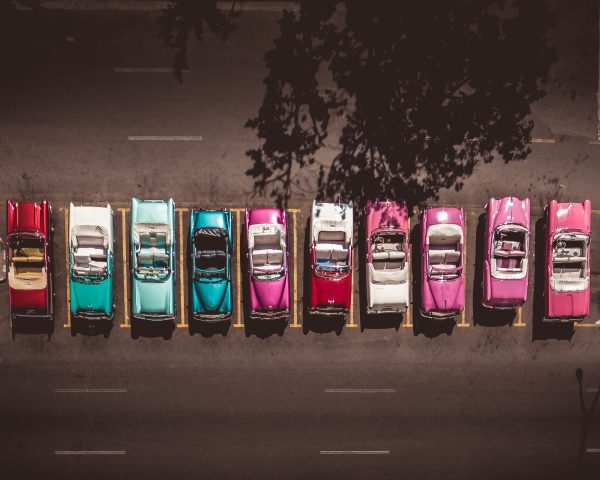 For many Canadians, Havana, Cuba is an obligatory weekend excursion the first time they head to the country for an all-inclusive beach holiday. Perhaps you have done it too—a whirlwind walking tour in the old town, posing at the Cathedral Square, strolling Obispo Street, visiting a rum or cigar factory, perhaps both. Then, you stop at La Bodeguita del Medio for a mojito, followed by a daiquiri at El Floridita.

Many who return to the country don’t include a junket to the capital city, the thinking being, been there, done that. If that describes you, you are missing out on the new Havana.

While the old Havana charm is still as captivating as ever, it has morphed into much more than a historic destination. As the city celebrates its quincentenary birthday on Nov. 16, let’s take a fresh look at the City of Columns.

A luxury destination
When Cuba began heavily promoting tourism to Canadians 20 years ago, luxury accommodation was quite limited. Not anymore.

The Gran Hotel Manzana Kempinsky La Habana, which sits atop one of the remaining sections of the city’s nearly 350-year-old colonial-era wall, has been open since June 2017. It is located across the road from El Floridita, where Ernest Hemingway used to sip daiquiris. The rooftop infinity pool overlooks the capitol, the Great Theatre and the UNESCO World Heritage old town centre and is the perfect place for a respite after exploring the bustling city. kempinski.com

Last year saw the grand opening of the Iberostar Hotel Packard. It is not by chance that it has the same name as the iconic car—the ground floor of the original building used to be a showroom for Detroit’s Packard Motor Car Company. The building has since been completely reconstructed, and the spacious guest rooms are chic with cool retro touches. The L-shaped outdoor sun terrace and swimming pool is my favourite, as certain areas are always in the shade during the day, so I can enjoy the pool but stay out of the sun. Bonus: the terrace offers a spectacular view of the Morro Castle and the Bay.
iberostargrandpackard.com

The new Sofitel SO/ Paseo del Prado La Habana. Located at the intersection of Paseo de Marti and Malecón, it is right in the heart of the city. Design is a big focus for this inaugural SO/ property in the Americas. You will find stylish contemporary furnishings, innovative technology and thoughtful designer amenities in the guest rooms, while the hotel emblem and the staff’s uniforms have been conceived by Spanish fashion designer Agatha Ruiz de la Prada.
sofitel.accorhotels.com

For those who prefer more local ambience, there is always the grande dame: Hotel Nacional de Cuba. The 89-year old Art Deco-style hotel is considered a symbol of the history, culture and identity of the country. It has hosted such illustrious guests as Hemingway, Jean-Paul Sartre, Frank Sinatra, Winston Churchill, and Marlon Brando, just to name a few. The beautiful lobby exudes old-world charm, and there is much history associated with the property—from the historic mafia meeting in 1946, to the bunker and tunnels used during the Cuban Missile Crisis.
hotelnacionaldecuba.com 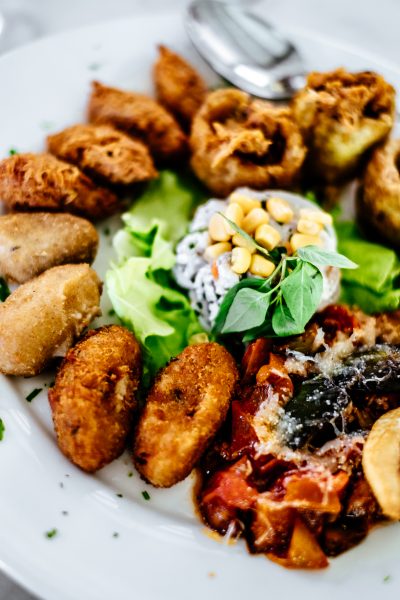 Few would see Havana as a foodie destination. However, when Raul Castro began economic reform in 2010, the tide started to change. If you are in search of good food, there is a new term to learn: paladar (restaurants operating out of private homes). While they existed pre-reform, the limitations on seating, the types of offerings and workforce are now lifted, allowing for more innovation and specialization. From authentic Cuban cuisine to internationally-influenced fare, they are the driving force in the transformation of the city’s food scene.

San Cristóbal in central Havana is definitely one of the most famous paladares in Havana. Named after its owner, Carlos Cristóbal Márquez Valdés, its eclectic wall decor is instantly recognizable. Its claim to international fame, however, comes from serving some 20 foreign leaders, including former U.S. President Obama, who took his family there for dinner in March 2016. Other celebrities who have dined here include Beyoncé, Jay-Z and the Khardasians. The Cuban-Creole fare features steak, diver-caught cod and live lobsters. If Carlos is there, he will proudly show you photos with his famous guests. Calle San Rafael No 469.

Another stellar example is Lorenzo Enrique Nieto’s Café Laurent, a chic restaurant perched on an apartment building rooftop, steps from Hotel Nacional. This was the owner’s family home when they began operation in the living and dining room on Feb. 13, 2011. It was literally an overnight success, for there was a full house on their second day of business—it was Valentine’s Day and Habaneros were looking for a new dining spot.

Business continued to flourish, so to increase capacity, the family moved out and the restaurant now encompasses the entire penthouse apartment. Chef Ernesto Montells brings a Peruvian-Asian touch to locally-caught seafood. The atmosphere is stylish, the diners are dressy, the service is sleek and the panoramic view from the terrace makes for a memorable setting. paladarcafelaurent.
restaurantwebexperts.com 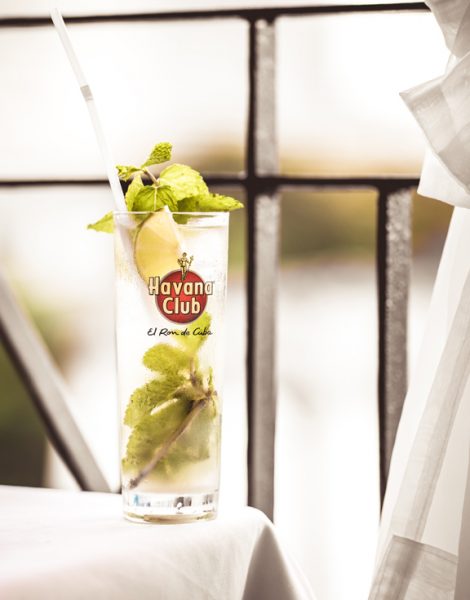 For authentic Cuban fare, check out Rita y Champagne in the Playa quarter. I was lucky enough to be invited into chef/owner Sahily Romero’s kitchen to learn how to make cheese-stuffed plantains and pulled beef and rice. Don’t underestimate this suburban restaurant—multiple Michelin-starred chef Martin Berasategui and Princes Charles have both dined here.
facebook.com/RitaChampagneHavana

An art and music haven 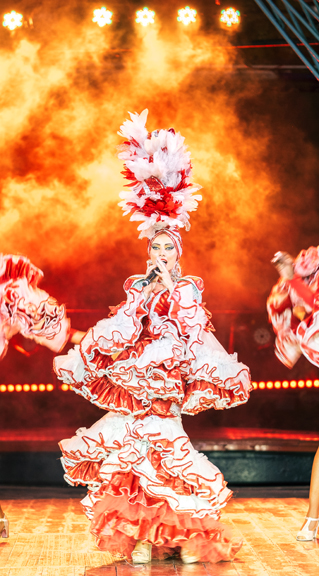 Art and music have always been an integral part of Cuban life. Most tourists will have heard of El Tropicana, the fantastic cabaret in a lush tropical setting. Celebrating its 80th birthday this year, the Vegas-style show is as spectacular as ever.
cabaret-tropicana.com

If you like bolero, son and danzón, Hotel Nacional hosts a traditional Cuban music night every Tuesday and Saturday, with excellent guest covers of the internationally famous Bueno Vista Social Club. Guests can choose between a dinner and show package, or just a welcome cocktail and admission to the show.
hotelnacionaldecuba.com

For a more grassroots experience, visit the Muraleando, a social arts project in the Lawton neighbourhood of the city. An 83-metre-long mural and numerous whimsical sculptures made out of old car parts and plastic household items greet you as you enter El Tanque, the headquarters of the arts community nestled inside an abandoned water tank.

It began in 2010, when artist Manuel Baldrich cleared the site with the help of volunteers and began to host free after-school and Saturday art/music workshops. Now, more than 300 school children come here regularly for classes, which include painting, ceramics, folk dancing and instrumental music. Impromptu jamming sessions happen frequently, much to the delight of visitors. 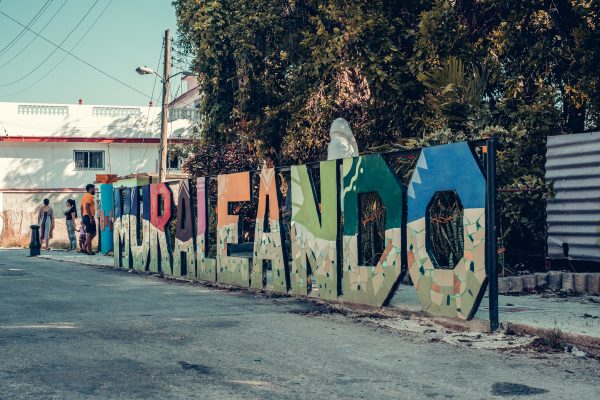 Another notable community art project is Fustelandia. just 20 minutes west of the city centre. It is a fantasy world, where every house wall, bus stop, fountain and bench in the neighbourhood is covered in a kaleidoscopic mosaic—think Gaudí in a tropical setting. It began in 1975, when folk artist José Fuster began decorating his own home and garden in tiles. After he finished his own property, his neighbours began to ask him to do theirs. It took him more than a decade to add his creative touch to all 80 houses in the area and, in doing so, transform a once-derelict part of town into an artsy wonderland. 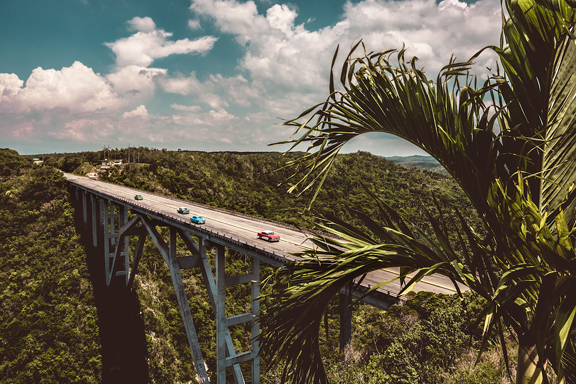 Havana is an excellent base for excursions into the countryside. You may have heard of Viñales, home of the giant hillside Mural de la Prehistoria and the tobacco-growing region. It is definitely one of the most popular day-trip itineraries for visitors to Havana, and well worth a visit for the scenery, the cigars, as well as the horseback riding.

Lesser known to foreign visitors is a hidden paradise called Las Terrazas, halfway through the three-hour drive from Havana to Viñales. Built around a creek, this region was designated a Biosphere Reserve by UNESCO in 1984, but it hasn’t always been a tropical Garden of Eden.

In the 18th century, the area featured more than 50 coffee plantations that were later transformed into sugar cane fields. Two centuries of indiscriminate deforestation, compounded with hurricanes and flooding, ravaged the land.

In 1968, in an effort to help rural Cubans, Fidel Castro enlisted Osmany Cienfuegos, architect and brother of revolutionary hero Camilo Cienfugeos, to build a 1,360-kilometre-long series of terraces and to plant seven million trees to combat soil erosion and restore the environment. Slowly, a self-sustaining community with roads, homes and schools evolved.

In 1994, Hotel Moka was built to allow people outside the community to enjoy nature. True to its goal of respecting nature, the property was built around the trees, including a 100-year-old rain tree growing through the centre foyer of the lobby—and many teak trees poking through guest rooms. 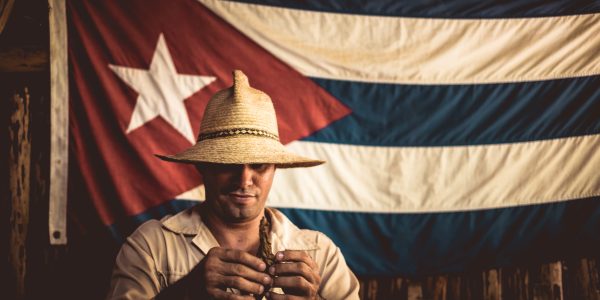 With numerous hiking trails, natural river pools, artist studios and paladares, the area warrants at least a night’s stay. However, if you are just stopping for a visit, be sure to stop by Cafe de María. This open-air coffee shop is reputed to serve the best brew in Cuba, using beans that are literally grown on its doorstep. Try Cafe Las Terazzas, an iced coffee with chocolate and cream. lasterrazas.cu

Canadian nationals holding a valid Canadian passport or a Canadian permanent resident card do not need a visa to enter Cuba. They can travel with their valid passports (and PR card) and the tourist card that is included in the holiday package (provided onboard or at the airline counter at airports in Canada at time of check in). It is important for you to know that the Canadian passport should be valid for at least one week after the return date.

If you do not fall in either of the categories mentioned above, please contact the Cuban Consulate – Tourism Section at [email protected]